Labor Day By the Numbers: 19 Stats You Need to Know 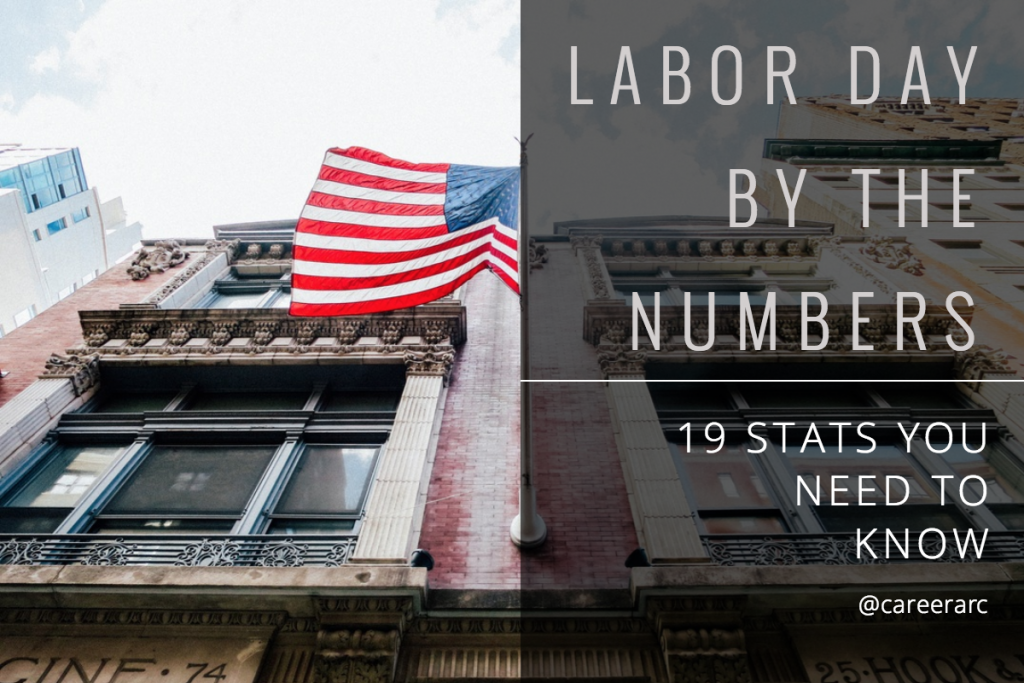 We’ve noted how Labor Day is a national holiday wrapped in surprising irony. This year we look at the numbers that define today’s American workforce, with a focus on some of the primary issues revealing both the progress and plights of U.S. labor, and its laborers.

158.5 million – The number of working Americans age 16 and over. (BLS)
25.4 minutes – Average commute time for the typical American worker. (US Census Bureau as reported by WNYC)
$2600 – Average annual cost of commuting to work. (Citi Commuter Index as reported by CNN )
34.4 hours – Average number of hours Americans work per week. This is consistent with this year’s BLS July report which clocks the typical workweek at 34.5 hours. The U.S. ranks 16th in the world for the longest workweek. (OECD)
15 million – The number of people who were self-employed in 2015, making up 10.1 percent of the U.S. workforce. ( BLS)
53.5 million – The number of millennials in the workforce. Millennials became the largest generation in the labor force in 2015. (Pew Research)
18.8 percent – Percentage of Americans 65 years or older who are working full- or part-time. Pew Research notes that there are more older Americans of this age working today than at any other time since the turn of the century.
11.1 percent – The percentage of the workforce who are union members, down from 25.4 percent in 1979. (Economic Policy Institute)

The Signs of Stalled Recovery

12.9 million – The number of jobs added to the economy since June 2009, the official end of the Great Recession. (Center for American Progress)
However, many economists are pointing to a few key metrics which have yet to fully recover, namely unemployment and wage growth.
28 weeks – Average length of unemployment as of July of this year. The Center of Economic Policy and Research (CEPR) notes that this duration is historically high and more characteristic with a recession than with a strong labor market. The BLS considers anyone unemployed for 27 weeks or more as long-term unemployed.
2 percent – Average year-over-year growth in nominal wages since the Great Recession. Right before the recession, nominal wages ticked up by about 4% annually. (CEPR)
Related: 4 Most Common Mistakes in Diversity & Veteran Hiring

47 percent – Percentage of women in the workforce . (Department of Labor)
79 cents – The amount U.S. women earn for every dollar earned by American men when comparing women’s median annual earnings of full-time, year-round workers as a percentage of men’s. 50 years ago in 1964, the ratio was 59 cents to one dollar. Women currently make up 47 percent of the workforce. (Department of Labor)
Two-thirds – The share of minimum wage earners who are women. (Deptartment of Labor)
80 cents – Roughly the amount college-educated black and Hispanic men earn for every dollar white college educated men earn ($25 and $26 vs. $32, respectively). (Pew Research)
29 percent – The share of women in Executive positions in the overall private sector, with 71 percent of Executive positions held by men. In high tech, the share of women Executives is 20 percent.  (EEOC)
21.2 million – The number of men and women U.S. veterans–about 9 percent of the civilian population age 18 and over. (BLS)
495,000 – The number of unemployed veterans in 2015. (BLS)
5.4 percent – Unemployment rate for female veterans which has changed very little in the past year compared to that of male veterans which declined to 4.5 percent. (BLS) Are you reconsidering your talent acquisition tactics? Or making the business case for social recruiting and employer branding initiatives? Learn the key… 1 in 5 Workers, Laid Off In Past 5 Years, Still Jobless

“While the worst effects of the Great Recession are over for most Americans, the brutal realities of diminished living standards… It’s hard to imagine that just over 20 years ago, social media didn’t exist. Now with the popularity of social media… In last month’s issue, we covered the top trends to impact human capital in 2015, and chief among them were… 3 Ways You Can Use Social Media To Hire Veterans

Great news for military veterans: This past September, the veteran jobless rate dipped to 4.3 percent, now below the 5.1 percent national average. However, for… Today, diversity in the workplace is widely understood as not only being ethically important but also beneficial to the overall… Guest Post | By Bryan Durant, Client Success Manager, CareerArc As a minority and military veteran working in human capital technology, I am especially… While companies continue to succeed in today’s growing economy, demand for hiring employees has become more pressing than ever. Sourcing… The typical HR department sits on a vast amount of data. From recruitment data and career progression data to social… The typical enterprise HR department is sitting on a mountain of talent acquisition metrics. From applicant tracking systems (ATS) to… If you feel like sourcing candidates has become much harder throughout the years, you’re not alone. Today’s low unemployment rate has forced… Social Recruiting Roundup: 3 Top Posts You Might Have Missed

We’ve scoured the web to find the best posts on social recruiting — so you don’t have to. Catch up…

Today marks a great step in supporting the veterans of our armed forces in their job and career search. TweetMyJobs is… The 2016 predictions, trend pieces, and recruiting stats are in. At the top of each year, thought leaders in the…