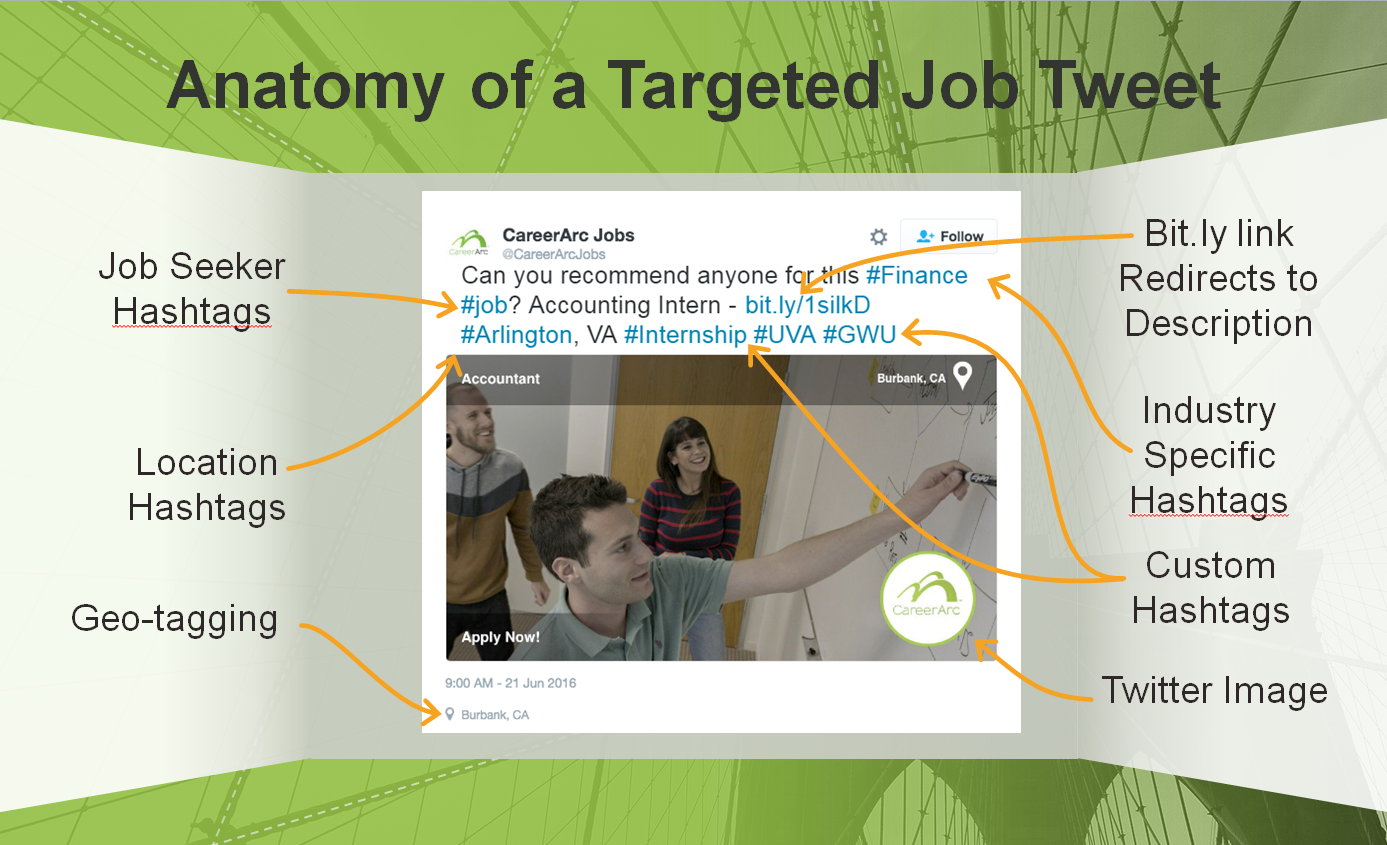 Alright. The title of this post may be harsh, and admittedly it’s an oversimplification.

Sure, there are several factors out of your control that could explain why a particular social media recruiting campaign does not return job potential candidates on Twitter you expected at that time–such as seasonality, or hyper-niche job openings or fields that lack an audience on social media.

But in my experience, regardless of the industry or job type, usually the real culprit behind unsuccessful recruiting on twitter is the lack of an informed strategy and creativity–the “art” of social strategy often overlooked and yet more crucial than ever to any business use of social media.

Below is an example of how we helped one of our clients generate a surprising amount of applicants through one Twitter recruiting campaign, with a bit of creativity and iteration. But first, before we talk strategy, let’s talk about the main building block to any Twitter campaign–the hashtag.

The Talent Acquisition Pro’s Definition of a Hashtag

For those who are familiar with Twitter know that it’s a powerful search engine where you can find live and logged conversations on an infinite number of topics. For job seekers in particular, Twitter users can search or even create a feed based on search strings like “sales job San Francisco,” which automatically pull tweets containing those keywords into that feed, effectively serving new job posts directly to passive candidates.

However, to only think of Twitter as a search results engine grossly limits its capabilities, as well as limits your view of what else passive candidates do on Twitter and on social media networks in general. Working in talent acquisition, it’s often easy to forget that candidates–active and passive–do more than search for a job when they’re online. They’re following other topics as they develop over time–be it the latest story on their favorite team in the playoffs, or takeaways from a conference, or an event they are attending and live tweeting from.

This is why I and my fellow CareerArc Client Success Managers like to think of Twitter accounts as the modern newspaper. Hashtags act as the headers in that newspaper, providing the title of the ongoing conversation that changes in real-time.

When working with a client to develop a Twitter profiles and recruiting campaign strategy, we first try to answer a set of questions together:

Brainstorming using the questions above has helped lead to creative approaches required to optimize social campaigns, build talent pools and often lead to discovering opportunities your competition might be overlooking. Below I recount one recent example of a client’s successful social media campaign to illustrate how some creative thinking and an iterative approach to campaign optimization can generate real social recruiting results. 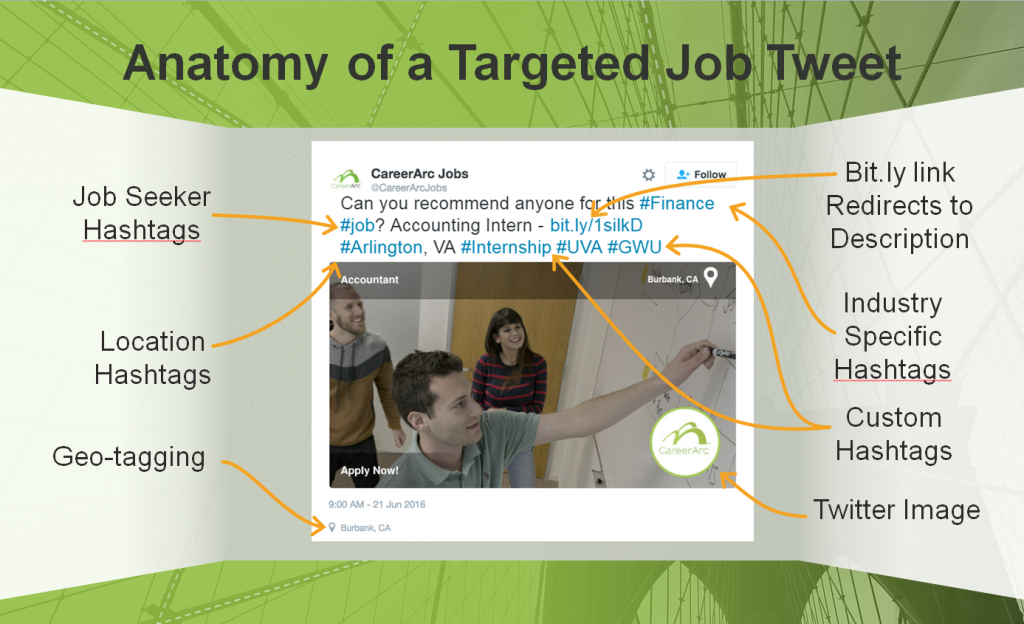 One of my clients was gearing up to find top candidates for their successful paid summer internship program that ran from May to August; about half of open jobs they had listed at the time were for internship positions in a variety of disciplines, such as Insurance and Financial Services; Marketing and Communications; IT, and Government Relations.

(1) Who are your candidates and what are they talking about?

My client was targeting nearby, enrolled college students within the greater Virginia area.

(2) Which conversation do you want to take part in?

Candidates engage in multiple conversations online, and knowing which conversations are appropriate for brands to join, as well as which will give immediate or lasting exposure requires research, instinct, and creativity.

On Twitter, topics center around a given hashtag that helps punctuate and tie tweets as well as tie that tweet to that topic. First, I recommend brainstorming about 10-15 topics, news, events, and their corresponding hashtags you think your candidate audience is engaged in. Now that you have a list of 10-15 hashtags to consider, it is time to evaluate and pair that list down to about 5 hashtags you actually want to use in your tweets to test reach and engagement.

I also recommend using a free tool called Ritetag  which provides real-time analytics on the popularity of a given hashtag as well as a keyword cloud of associated hashtags linked to the ones you are considering. 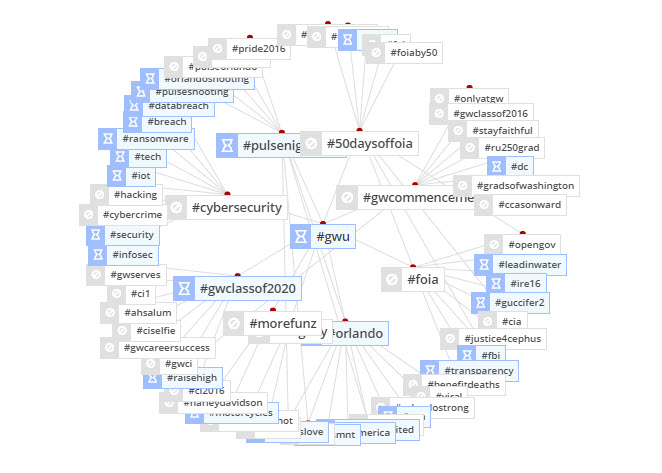 I also recommend another free tool, Tweetreach, which shows the reach and exposure of any keyword or hashtag on Twitter over a given period of time. Knowing this helps you gauge which trending hashtags might promise immediate spikes in engagement, and which will give you sustained traffic over time. 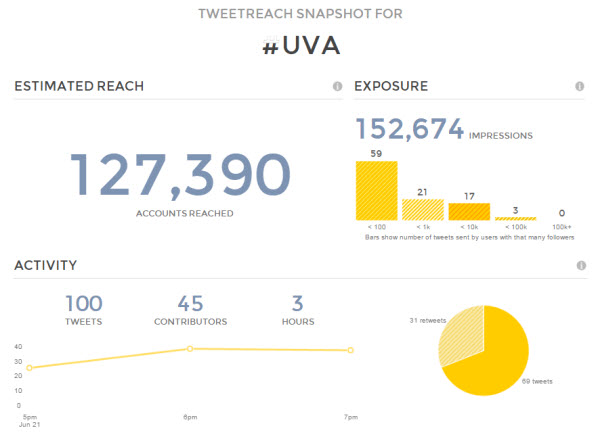 To set baselines we began adding #university #internships #careers to their job tweets that advertised internship positions. Within one week the engagement for our campaigns using these hashtags quickly grew by 3x.

We then got specific about who and where these students were. We researched hashtags of universities in the greater Virginia area and focused on two: University of Virginia (#UVA) and George Washington University (#GWU).

Using Tweetreach, we noticed #UVA had 10x more the engagement compared to #GWU and most of that engagement centered on the UVA sports team. We quickly realized the reason behind the spikes in engagement: In just a few weeks UVA would be competing in the NCAA Tournament (a.k.a. March Madness) and were considered a favorite to rise in the brackets.

At this point we had to do a quick gut check. Would using the #UVA hashtags to promote our internship during the NCAA Tournament be (1) appropriate and (2) effective? To evaluate the pros and cons, we ran through the same four questions, specifically on the last two:

(3) How do you want to come up in that conversation?

(4) What do you want to say or contribute?

We quickly determined that we should push forward. Why?

Although we expected #UVA to be a prominent hashtag in discussions on the NCAA tournament, the hashtag was general enough for us to also use to serve the same college students with a different purpose–to inform them of nearby, valuable internship opportunities that could help define the start of their careers. We could also expect the hashtag to reach a wide UVA audience from various majors and backgrounds, helping diversify the pool of candidates we attract. There were no negatives to this approach, and it would have been irresponsible not to proceed.

We began adding these hashtags to our internship job postings and saw immediate spikes in engagement. 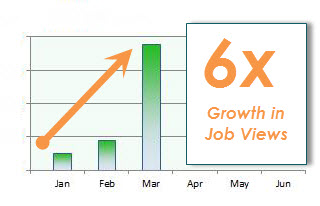 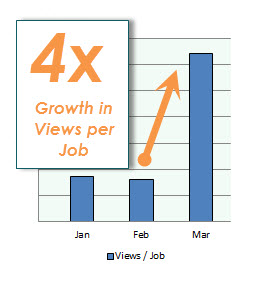 My client was surprised with the exposure their internship posts received in just six weeks. The experience also helped illustrate the benefits of social media–it’s real-time, news-focused, content-driven nature–which many companies tend to first see as labor-intensive, or even as a source of liability. But those who can identify and embrace the opportunity can generate surprising results on Twitter.

One important word of caution: Because social is a living, breathing platform evolving at each turn of event, you cannot “set-and-forget” campaigns indefinitely on any social platform. March Madness only occurs in March. Come April, you may want to refocus your campaigns on another school, event, etc.

Bottom Line: The majority of unsuccessful job tweets fail because the tweet itself is not optimized to target your candidates, making it harder for them to find you. Passive candidates are using the Twitter search bar and finding jobs. Learn where your candidates are spending their time on social, and creatively and appropriately contribute to that conversation.

Gone Remote? A Step-by-Step Guide on Implementing a Program Properly